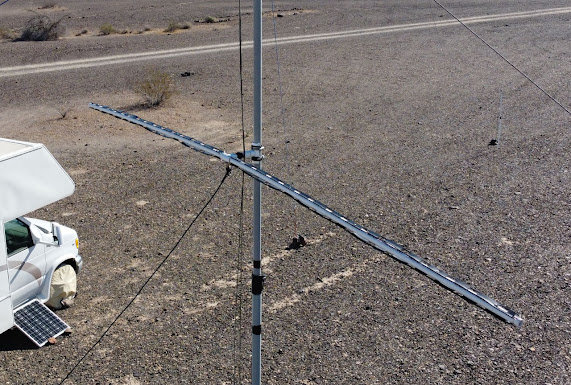 It's springtime here,  that time of year where 6 meters occasionally opens up.   And I need a decent 6 meter antenna.    I'd love a beam, but I live in an RV and have very limited space.   So a dipole it is.

I've long been aware of cage dipoles and their broader bandwidth verses a regular dipole.  So I thought up a way to make a simple four wire cage dipole for 50 MHz.    Here is the design. 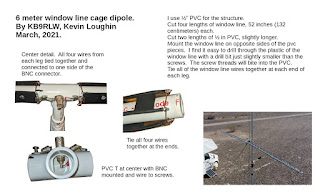 In order to test the increase in bandwidth,  I initially just put a singe wire on each leg and swept it with my Blue VNA. 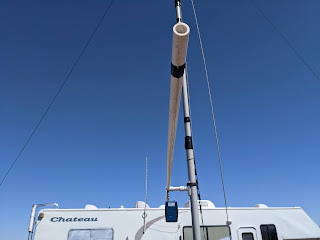 (single wire dipole being measured)
And here is the sweep of the single wire dipole, showing a bandwidth of 2.6 MHz between the 2:1 points.   One interesting point I noticed.   Modeling and literature all point out that a half wave resonant dipole will have ~74 ohms impedance at it's resonant frequency.   We measured 73.8 ohms, how about that! 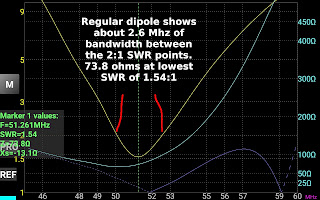 Then I finished building the cage and swept it again. 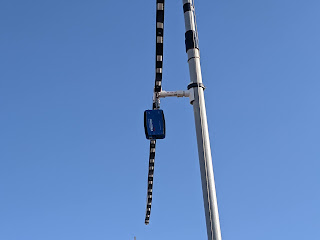 (The cage version being measured.)
Here's the result.   The bandwidth has increased by 77% to 4.6 MHz! 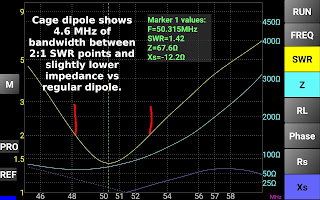 So there we go.  The cage design not only increased bandwidth, but also slightly lowered the impedance and SWR at it's lowest point.    Some might wonder why I didn't trim the antenna to raise the lowest SWR to the center of the band.  Well, 99% of my operation on 6 meters is down at the CW/SSB/digital end of the band, so that's where I wanted the lowest SWR.
Now I'm all ready for those coming 6 meter openings.
Posted by LilFluffy at 10:28 AM No comments: