I wanted to build a  2 meter Yagi antenna so I could start playing around on 2 meter SSB and CW. 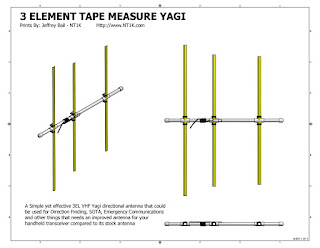 I'd helped another ham build one this past summer and I was impressed with it's performance.   There is a downside to the design though.  In even a mild breeze, the tape measure elements vibrate and sometimes flap around in the wind.

Also,  I live in an RV and travel a lot.   My antenna will be up and down often, and packed away every time I travel.  It has to be durable since it will undoubtedly get bumped around from time to time.

I also wanted a fairly wide bandwidth, providing a low SWR across the band so I could operate down in the SSB region or up in the FM area with good performance and no tuning required.

With durability and bandwidth in mind,  I decided to build the structure out of PVC pipe and the elements out of window line.   PVC is cheap and strong.  If the antenna ever broke from an impact, it would be easy and cheap to repair.   The *fat* elements created by the window line should provide for a broader bandwidth.

Initially, my plan was to use a folded dipole for the driven element.   I've seen many commercial Yagi antennas using one.  Folded dipoles are less noisy and a bit better at rejecting out-of-band signals, also providing a nice uniform pattern.

I spent a couple of days working on that idea, but had trouble getting it to work.   A folded dipole presents around 450 ohms of impedance at it's feed point so you need a matching network to match to the 50 ohm feedline.   However, in a Yagi,  the parasitic elements of the reflector and directors change things.  Yagi's usually have a lower impedance at the feedpoint of the driven element and I just couldn't get a good match to 50 ohms using a trombone coaxial match.

Abandoning that approach,  I decided to start with the tape measure yagi design and adapt it.

Pictured here is the resulting antenna and a plot of it's SWR over the 2 meter band. 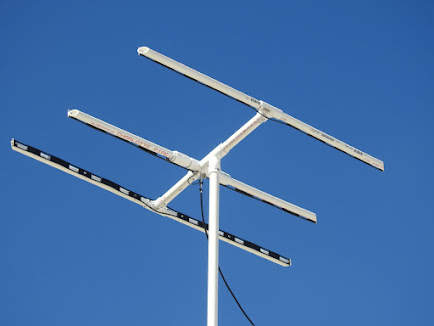 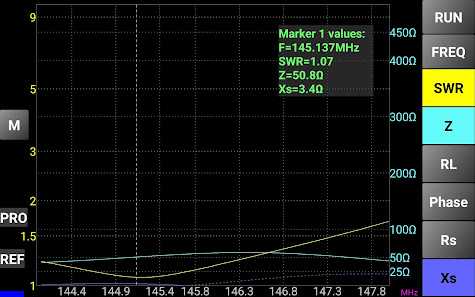 As you can see, it's a success!  Performance is quite good.  Comparing the yagi, when rotate vertically, to a slim jim, I saw a big improvement in signal strength with a repeater that is 60 miles, or 96 kilometers away.
Slim Jim:  Repeater received signal strength, S3-S4.   Minimum power required to hit the repeater, 3 watts.
Yagi: Repeater received signal strength, S5. Minimum power required to hit the repeater, 1.5 watts.
A single S-unit indicates approximately 6db. That's 6db over the 3db gain of the slim jim, so the gain with the Yagi is around 9db.  Pretty good!  I tuned it to favor the lower end of the band a bit since I would mostly be using it down there for SSB and CW.  You can see by the plot from my Blue VNA that the bandwidth is good and broad as I'd hoped.
Here is the design of my antenna with dimensions. Click image for larger view, right-click on image to save it to your computer. 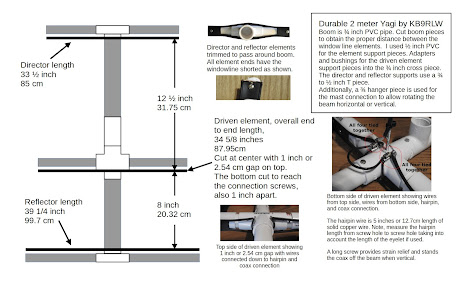 Design notes:   (Pipe dimensions are in inches, I'm not sure of the metric equivalents,)
The physical structure is common PVC pipe and fittings that you can buy at any hardware store.
The boom is made with 3/4 inch PVC pieces.  The element supports are 1/2 inch pieces.
The T pieces at the ends of the boom are 3/4 to 1/2 adapter T's
I couldn't find a cross part with 1/2 inch and 3/4 inch holes, so I used a 3/4 inch cross and adapters to       go down to the 1/2 inch element supports.
The mast connects to a PVC slip on part used to hang PVC pipe from a ceiling.  It slides onto the 3/4 inch boom pipe and has a threaded opening.  A 3/4 inch pipe to thread adapter allows the antenna to be screwed onto the mast when setting up the antenna.
I cut the ends of the element supports at a 45 degree angle to eliminate the pipes from whistling when there's wind.  (plus it just looks cool!)   I also put the elements on the inside edge at the ends so I could set the antenna down without damaging the wires.
*Be sure you cut the boom pieces so the distance between the actual elements are correct!*
Window line:
I suggest first cutting three lengths of window line, using the lengths specified in the drawing.    Then fit them against the element supports, trimming out the middle part where the window line wires go around the boom.   Once that's done, short the ends as shown before mounting them to the supports.   Make sure they are perfectly centered on the supports with exactly the same distance from the center of the boom to each end of the element.
Elements notes:  (It's a finicky antenna, be certain to get all dimensions precisely correct!)
Director and Reflector:
Cut the window line middle part out in the center so the wires go around the boom cleanly.

All elements ends:
The ends of each element have the two wires of the window line shorted together, electrically making the window line act like one fat conductor.   I found it best to bare a bit of the window line and then make a shorting wire out of a short piece of 14 gauge solid copper wire.  This way, during tuning, if you have to shorten the element, all you need to do is shave a bit more insulation off the window line.  Then heat the solder connections and slide the shorting wire down a bit, trimming off the stub remaining.

All elements, mounting to the PVC:
Short screws of any type can be used.   You want the window line tight against the PVC for nice and straight elements.  Use a drill bit just slightly smaller than the diameter of the threads on your screws and you can drill through the window line middle into the pvc, then thread the screw in.  It will bite into the PVC and provide a strong mount.
Also, it is very important to make sure the element is centered on the boom.  The more precise you are here the better the performance.   Measure from the center of the boom out to the end of the element and make sure it's the same distance to each end.
You also want to make sure the window line stays flat and parallel to the other elements.  Make sure your holes are centered in the window line and they follow a straight line along the pipe.
When cutting the 3/4 inch boom pieces, make sure the distance between the window line elements is correct.  The 3/4 pipe will go into the cross and T pieces about 1 inch.
Hairpin match and coax connection to driven element:
Pictured here is the center of the driven element and the connection to the coax and hairpin, notes below the photos. 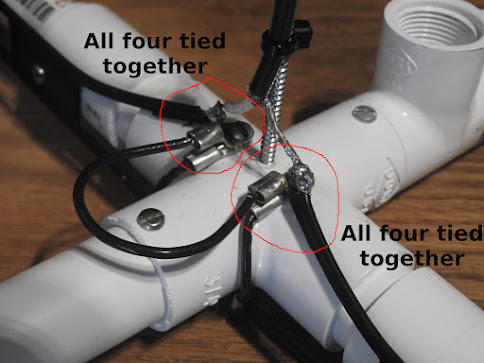 I used eye ends and ground lugs to make the connection between the coax, hairpin and window line.  (more on the hairpin further down.)
Additionally, there are two short pieces of 14 gauge solid wire to make the connection to the other side of the window line.   The gap there matches the gap at the connections, about 1 inch.
I used a long screw to make the strain relief for the coax.  It also stands the coax off of the antenna when it's vertical.  You don't want the coax in line with the antenna elements.
Also,  it's a good idea to seal up the coax end with silicone or liquid tape to prevent moisture from getting into the coax.  (I hadn't yet sealed it when I took this picture.)
Hairpin:
This is the most finicky part of the antenna.   The tape measure design called for 5 inches or 12.7 centimetres length of 12 or 14 gauge wire.  I used 14 gauge solid copper wire.   You want to use solid wire so it maintains it's shape.
Also,  that length is to the connection point, so if you use eyes like I did, the actual wire will be about 4.75 inches or 12 centimetres.
The shape of the hairpin matters and is part of the tuning. (next section)  I started with a semi-circular shape.  You will end up pinching it down during tuning.
Tuning:
You'll need an antenna analyser to tune it.   The antenna will have to be away from metal objects also.  A short temporary mast of 5 or 6 feet should keep it well up from the ground.
First, we need to make sure the resonant point is where you want it in the band.  To shift it you adjust the length of the driven elements.  If you followed my design precisely, it should be around 145Mhz right off.
If you need to move the resonant frequency up, you will shorten the elements slightly.
Note!  It doesn't take much change!  Shaving only 1/4 inch off the driven element will shift it by around 1.5 to 2 MHz!
If you do need to change the length of the driven element slightly, you will probably want to also change the reflector and director elements by exactly the same amount.
Once you have the lowest SWR point at the frequency desired, we can fiddle with the hairpin to tweak the match and get the lowest SWR at resonance.
Start to pinch in the shape and check SWR.  You should be able to get it right down to almost 1:1 at the resonant point. This won't change the resonant frequency, just the impedance match.

Additional notes:
For SSB or CW, you'll want the Yagi horizontal.  For FM and repeaters higher up in the band, the orientation should be vertical.   The PVC hanger that I use allows the antenna to easily be rotated.  To lock it in place, I drilled a hole through the hanger into the boom and inserted a screw.   I drilled a second hole into the boom when rotated the other way.  This way you can change the orientation by backing out the screw, rotating the antenna and putting the screw back into the other boom hole to lock it. 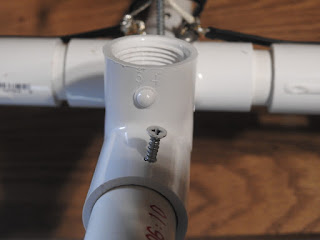 I'm very pleased with the operation of the antenna.  I'm sure it will give me many years of use and contacts.   For my use on my RV, I use broom holders to allow me to snap it on the side with a short 3/4 PVC mast and easily rotate it to point in the direction I choose. (pictured below)

I've been able to hit repeaters that I could hardly hear with the slim jim and am starting to play around with making SSB and CW contacts.   I also did a video on this project with some demos of the antenna in action.   Linked below.
Youtube video about this, click here.